Tired of waiting on a realtor or property manager to provide you with the information you’ve been requesting? If you’re interested in learning how to obtain copies of your condominium documents, including The Declaration of Condominium, The Association Articles of Incorporation and By-Laws, Amendments, Assessments, Floor Plans, HOA rate structures, etc. Just follow these simple steps: END_OF_DOCUMENT_TOKEN_TO_BE_REPLACED

Before you buy a condominium, and in some cases, before you start looking for a condo, you should read through the Declaration of Condominium. I know you are probably thinking that there are far better uses of your time than combing through a 100-page document full of legal jargon that probably won’t affect you anyways. And this might be true. But if you’re like me and you’d rather be safe than sorry, here’s some guidance that will help you skim through those lengthy docs and pick out the important stuff. END_OF_DOCUMENT_TOKEN_TO_BE_REPLACED

If you’re thinking about living in Downtown Orlando, you should probably give some consideration to which buildings have the worst reputation for being noisy. You should also be able to gauge your specific level of tolerance when it comes to the various types of noise you’ll encounter. END_OF_DOCUMENT_TOKEN_TO_BE_REPLACED

A Bit of Orlando History

The Waverly on Lake Eola is one of Downtown Orlando’s most iconic high-rise buildings. In 2001, the developer, Zom Inc. went out on a limb when he sought out to construct the first luxury high-rise apartment building in Downtown Orlando. You heard me right, the impressive condominiums at The Waverly started out as apartments! And the rents were higher than the downtown area had ever seen.

Just over a decade ago, Downtown Orlando’s skyline looked a lot different than it does today. Shortly after The Waverly’s 230-units began leasing, several new developers came to Downtown Orlando with a mission to transform the city center into a residential mecca. END_OF_DOCUMENT_TOKEN_TO_BE_REPLACED

In beautiful sunny Orlando, a must-have for residents living downtown is a quality pool that they can cool off in during the long summer months. Whether you’re a resident or visitor, it’s always good to know which buildings have the most desirable pool in town.

So which Downtown Orlando Residence has the best pool? After visiting and spending time at nearly every pool in the Downtown Orlando area, here is a review of my favorites. END_OF_DOCUMENT_TOKEN_TO_BE_REPLACED

The Vue at Lake Eola is one of several luxury high-rise condominiums in downtown Orlando. Built in 2007, this 36-story, 375-unit building is among the tallest buildings in Downtown Orlando, and conveniently located on the Northwest corner of Lake Eola.

As a resident at The Vue for the past 6 years, I’ve come to learn the pros and cons of living in this highly sought after residence. END_OF_DOCUMENT_TOKEN_TO_BE_REPLACED

Of all the high-rise buildings in downtown Orlando, The Sanctuary has earned a reputation for being the most prestigious residence. Home to several Orlando Magic players and wealthy entrepreneurs, this building’s exclusivity attracts a very elite demographic.

Having lived in downtown Orlando for nearly 6 years, I’ve often wondered what it would be like to live in the 18-story building that occupies the corner of Eola Drive and Pine Street. That’s why I didn’t hesitate when I was offered the opportunity to take a tour of the condominium and several of its units. END_OF_DOCUMENT_TOKEN_TO_BE_REPLACED

This table shows the Average HOA Fees for each of the major Downtown Orlando Condominiums in 2016, expressed as dollars per square-foot (SF). Per Chapter 718 of Florida Statutes, all condominiums created after April 1, 1992, must use square footage as the basis for calculating the residential unit ownership share of the common elements. This share is then used to determine the unit-owner’s maintenance or association fees. Prior to this rule change, condominiums typically assigned ownership rights based on the type of unit. 530 East Central Condominiums and Reeves House fall into this category as they were constructed in 1985. Their HOA Fees are structured differently. All 1-Bedroom units, regardless of size have the same monthly condo fees. The same goes for 2-Bedroom units, 3-Bedroom units, and so forth. 530 East Central Condominiums HOA Fees actually range from $0.50/SF to $0.60/SF. Reeves House HOA Fees range from $0.27/SF to $0.31/SF. 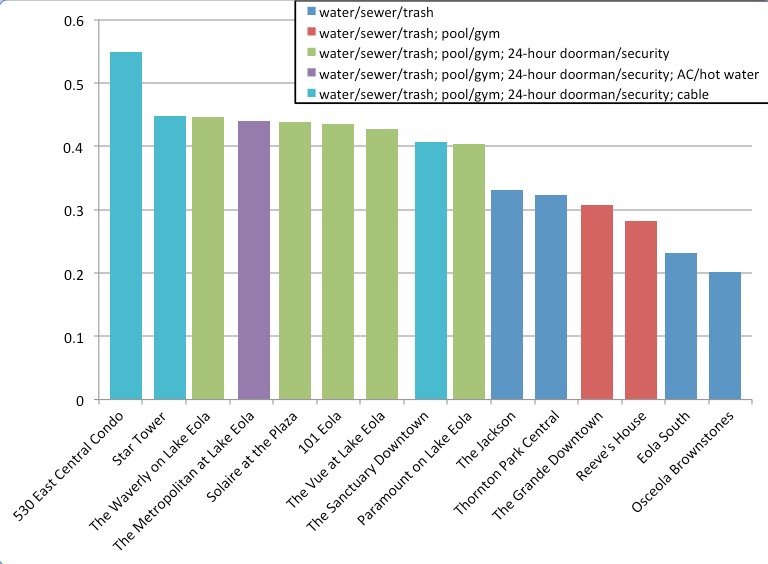 In addition to showing you what the HOA Fees are for all of the Downtown Orlando Condos, this chart also shows them color-coded by the services that are included. Most associations include water, sewer, and trash as a common expense since units aren’t typically metered separately. A condominium that has amenities such as a pool and fitness center would incur additional expenses to maintain these facilities. So it would be reasonable to assume the HOA dues at these residences would be slightly higher than those with limited amenities. Having a full-time security guard or doorman is another hefty expense for the condominium association. The staffing cost for these services is far greater than the costs associated with maintaining a controlled access security system. 530 East Central Condos, Star Tower, and The Sanctuary all include basic cable in their HOA Fees. Depending on your service provider, this could be $60/month value, or $0.02 – $0.06/SF in terms of HOA Fees value.  The Metropolitan at Lake Eola has a very unique situation when it comes to shared utilities. This building was originally converted from a hotel to a condominium in 2004. During the conversion the Developer opted to keep the hotel’s mechanical and plumbing configuration as they were. To this day, the air-conditioning system and heated water are both master metered at The Metropolitan, and the charges are rolled into the monthly HOA Fees.

Condos with the Highest and Lowest HOA Fees

530 East Central Condominiums has the highest HOA Fees in all of Downtown Orlando. Even if you factor in the value of the basic cable that’s included in their HOA Fees, you’re still 10-20% more than every other condo in Downtown Orlando. Reeves House was built during the same time and their HOA Fees are among the lowest. So the building’s age can’t be entirely to blame for the costly dues. It turns out the main reason for 530 East Central Condo’s financial trouble was due to the Developer going bankrupt and not adequately funding the Condo Association Reserves. And with no reserves, the condo owners were stuck footing the bill for everything. In lieu of having a bunch of unscheduled assessments, the HOA continued raising the rates for the monthly condo association fees to cover the building expenses.

If you don’t like the idea of paying over $500/month for a pool that you’ll never use, or a security guard that you don’t need, then begin your search at Osceola Brownstones. This townhome community has the lowest HOA Fees in Downtown Orlando. And just a few blocks away, units at the soon-to-be completed Thornton Park Brownstones are selling fast. The HOA Fees that are being advertised are less than $0.10/SF! We’ll keep an eye on these HOA Fees in the coming months to see if they get bumped up once the Developer relinquishes control to the homeowner’s association.

Looking at the buildings that have controlled access security systems instead of manned security personnel, Eola South ($0.23/SF) and Reeves House ($0.28/SF) have below-average HOA Fees. At $0.31/SF, The Grande is a better value than The Jackson and Thornton Park Central at $0.33/SF, due to its added amenities. Paramount and The Sanctuary have the lowest HOA Fees for the services they include at $0.41/SF. The Vue, 101 Eola, Solaire, The Metropolitan, The Waverly, and Star Tower are all right in line at $0.44/SF.

Since 2012, the Consumer Price Index for Housing has increased 1.93% a year. So it’s safe to assume that your HOA Fees will go up as well. Before you buy that condo of your dreams, make sure you do a little research to ensure the homeowner’s association is financially stable. By comparing the consumer price index increase of 1.93% to the HOA Fee growth rate over the same period of time, you can get a quick idea of what to expect for the future from these Condominiums.