Whether you’ve decided to move to Downtown Orlando for convenience or pleasure, you’d better be prepared to pay a premium for housing. Rent prices in the City Beautiful are on the rise and will probably continue escalating until the supply of apartments catches up to the demand.

Average 2016 Rental prices in the immediate downtown area, including the Central Business District and Lake Eola District are just over $1,900/month or $1.96/square-foot. That’s a lot of money! If you follow the general guidelines that your housing payments should not exceed 30% of your income, then you’d have to make over $76,000/year to afford living downtown.

The average household income for Orlando is $46,000. Does that mean the rental market in Downtown Orlando is too pricey for the average Central Floridian to afford? If you are following the advice of financial experts, then yes, living in Downtown Orlando is not affordable on an average income. But it turns out the majority of renters in the Downtown Orlando area aren’t listening to the experts. They are spending about $400/month more on housing than the 30% income to housing ratio would recommend.

Downtown Orlando isn’t necessarily unique in this regard. Most major Downtown City Centers command rent prices that far exceed what the average working class citizen should be able to afford. But when the demand is there, prices will go up. And the average income renters will have to go to extraordinary measures to afford living in the Downtown hub of their choice. 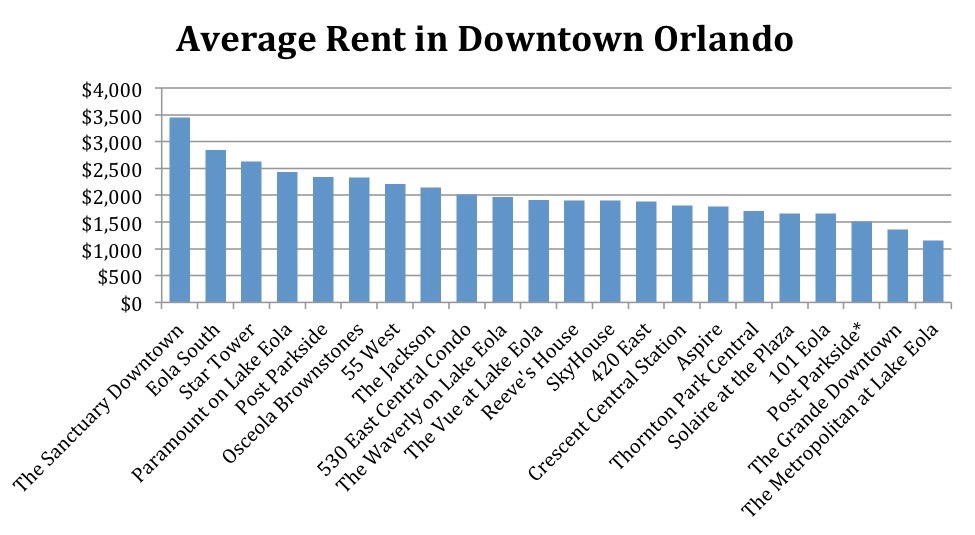 Renting in Apartments vs. Condos

As a prospective renter in the Downtown Orlando housing market, you basically have 2 options:

There are pros and cons to each option. But for the sake of comparing rental prices, we can assume that both options are of equal value to the renter.

At first glance, the difference in rental prices between the major Downtown condominiums and apartments is negligible. But when you factor in the square-footage of the units you’ll find a pretty sizable discrepancy. The average square-footage for all unit types (studios, 1 bedrooms, 2 bedrooms, 3 bedrooms) in condominiums is 25% greater than in apartment complexes. So for the same monthly rent, you’ll get about 250 square feet of extra space if you opt to live in a condominium versus an apartment. The average price per square foot for condominiums is $1.60 whereas the price per square foot for apartments is $2.00.

The apartment buildings in Downtown Orlando are on average newer than the condominiums. This could be one of the factors driving up the cost of rent in apartments. Or maybe the gap is only temporary and in the coming months we will see private condo owners bumping up their rental prices to align with the current market trends. It’s hard to say what will happen. But for now, if you want the most bang for your buck, condominiums are the way to go.